Theatre and vernacular print culture emerged hand in hand during the colonial period in India and became highly instrumental in propagating the anti-imperial struggle. However, an exclusive commentary on and for theatre emerged post- Independence and began to disseminate through magazines, periodicals, and newsletters, chronicling not only… Read More

“The happiest feature of this widespread interest is the fact that theatre in India has survived the onslaught of the film, Radio, as we have seen, offers little competition; television is, as of yet, absent though few will be able to hazard what its impact will be on the Indian people. But the film has a predominant hold on them. The Indian film industry is amongst the biggest in the world, yet save in a handful of instances… Read More

Advertisements and subscriptions are essential aspects in the running of print medium. While theatre magazines target/ed theatre artists, enthusiasts, critics, and theatre goers specifically, their advertisements and subscription flyers allow us to understand and analyse the readership and reception of these magazines as well as the circulation of theatre performances, discussions and scholarship… Read more

‘But if this sounds like easy communication at little cost, that’s also not correct. Anand Gupta is already weighed under with the money required to keep this Abhinay going. They have introduced tiny little panels for advertisements in the middle pages, a little banner advertisement on the top, and a half-page advertisement for the bottom half…Read more 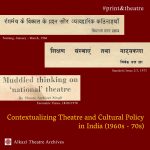 Post independence, theatre in India grappled with the question of an ‘Indian’ identity with the establishment of institutions like the National School of Drama, Sangeet Natak Akademi, Lalit Kala Academy, Sahitya Akademi, to name a few, in the 1950s. The Sangeet Natak Akademi Drama Seminar of 1956, presented its analysis and recommendations to the government on the factors hindering the growth of drama…Read more 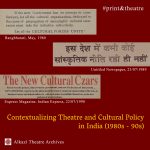 Beginning in the 1980s, economic liberalization in India had repercussions in the field of culture including theatre. A reader of Rangbharati magazine in May 1980 writes to its editor, “during the last thirty-three years of our independence we could not create a meaningful cultural awareness…the neo-capitalists and politicians pact, which is responsible for the rapid retardation of our nation’s economy and human values…Read more 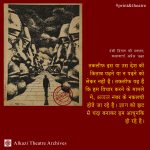 What does one mean when one uses the term ‘modern’ in a globalized and privatized Indian society? Aparna Dharwadker in her book ‘Poetics of Modernity: Indian Theatre Theory, 1850 to the Present’ (2018) notes, ‘An overtly decolonizing strain in post-independence discourse has rejected the modernity associated with western modes of representation as a damaging colonialist imposition, and argued for an alternative postcolonial modernity based on premodern indigenous traditions of performance…Read more

Labour Day: A Look Back at Utpal Dutt’s Angar (1959) in Seagull Theatre Quarterly 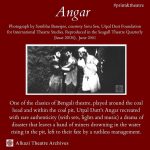 “Portraying the proletarian hero as a giant with no weakness is telling the audience that it’s impossible to be a revolutionary. The worker of peasant in the audience concludes: “I can never be like him, because I have many weaknesses.” Our hero must be as complex as any other human being. In one thing alone he must be simple, direct, and uncompromising: his class attitude…Read more

The erstwhile Director of All India Radio, K.S Duggal,  wrote passionately about television theatre at it’s advent. Comparing the aesthetics of adaptation of scripts from the mediums of radio and/or theatre to television, K.S Duggal notes “(TV producers’) salvation lies in building up their own scripts. They might use some of the successful radio and stage plays…Read more

In a review of the NSD Repertory Company’s 1989 rendition of Agyeya’s (S H Vatsyayan) novel, Apne Apne Ajnabi (1961) in Sunday Mail (Image I), Anand Gupt writes: “Though the essence of the novel has been held intact, the play departs from the conventions of storytelling, giving birth to a one-of-its-kind style of script writing. The five characters bring to life the experience of death, loneliness and alienation from the world…Read more

“A person belongs to a given time, but the world changes in time, and he changes with it. The world changes him, but he along with others, also changes the world. Herein lies his power. He is a product of a particular society in a particular period, but he can influence the change of that society by every single choice he makes, alone. The choices made, the actions taken by many many people like him ultimately change the world, for better or for worse…Read more

Amal Allana’s ‘The Exception And The Rule’ (1979): Brochure and Photograph as Research Tools

“Let nothing be called natural
In an age of bloody confusion,
Ordered disorder, planned caprice,
And dehumanized humanity, lest all things
Be held unalterable!”
“The Exception and the Rule,” was a popular Lehrstüke (Teaching Play) written in 1931 by German playwright Bertrolt Brecht…Read more
Shuturmurg: A Review in Natya Shodh Sansthan’s Rangvarta 1986

Natya Shodh Sansthan (est. 1981 in Kolkata) is the largest archive of materials on Indian theatre. In 1986 NSS began publishing their official news bulletin, ‘Rangavarta’ edited by the formidable art critic Samik Bandyopadhyay. The magazine articulated modern discourses on artistic and cultural significance of theatre and its practices…Read more
Mapping the Journey of a Play Through Brochures: Charandas The Thief in London

Habib Tanvir’s magnum opus, ‘Charandas Chor’ (1974) is based on a Rajasthani folk tale. A thief with a conscience, he can’t bring himself to rob the helpless or the poor, but runs rings around the pillars of establishment…Read more
Nemichandra Jain’s Newspaper Opinion on the Future of Art Forms in the Age of Mass Media

Contemporary theatre in India cohabits the spaces of newly emerging mass media and can be seen attempting to adapt its elements and forms. Theatre, as a place of viewing and an activity, is essentially a social medium catering to a large group of people and hence helping shape a public discourse. Then, in such a mass communication landscape, how does one define theatre…Read more
Looking at Theatre Zines as Social Documents: A Case Study Analysing Theatre History of Shahider Daak Published in 1987 Rangavarta

Theatre reflects and possibly affects its society’s view of the world: its history, philosophy, religious attitudes, social structure, theoretical assumptions, its way of thinking about humanity and the world and nature. Through its historiographic interventions it adds to the dominant discourse, forgotten and marginalized events…Read more
Debating Economies of Theatre Sustainability: An Interview with Naseeruddin Shah, Shaukat Kaifi, Dina Pathak and Farooque Shaikh, 1980 in India Today Newspaper

With the onset of the pandemic, theatre practitioners struggle with many similar, some nuanced concerns of their predecessors. Today, we look back at the India Today article dated 15 March 1980 where journalist Chitra Subramaniam interrogated the influence of theatre in India, it’s grappling with lack of economic support and contemplated…Read more

Analysing Theatre Circuits through Group Festivals: Looking at the Brochure of 1961 Bohurupee Festival at AIFACS, Delhi

Red Oleander (1923-24), earlier titled ‘Yakshapuri’, became one of the earliest works of Indian theatre critiquing modern totalitarianism, right at the cusp of the Non-Cooperation movement gaining momentum. When a megalomaniac ruler uses his subjects in the gold mining town of Yakshapuri as means to produce more personal wealth…Read more

Alternative Advertising and Cultures of Consumerism: A Newspaper Report on NSD’s Exhibition of Theatre Posters, 1979 by Kavita Nagpal

Advertisements through varied mediums are tools of spreading the consumerist culture. Amidst a practice of publicity and brand creation then, can one think of theatre as a mode of production? How does one navigate the traditionally participatory nature of theatre against the advertised ticketed audience arenas? Does it require unique and alternative advertising strategies…Read more

In a 2006 Hindustan Times article by Geetanjali Dang, Jamini Pathak, the solo performer of the play, Mahadevbhai 1892-1942, notes, “The play is ultimately a political comment on our times, as much as it is an analysis of our freedom struggle. Received wisdom is as dangerous as received …Read more

Theatre magazines and journals provide an inexpensive and available medium of playscript publication, as compared to individual/self publishing; the former expanding the scopes of translations, adaptations and circulation. With unique reach and readership, they carry canonical drama scripts as well…Read more

Employing Theatre as a Tool for Social Change: Discussing the Adaptation of Folk Forms in Amitava Dasgupta’s ‘Kaheke’ Through a Newspaper Review

Can theatre question the traditional practices of a community and reflect on discriminatory policies as well as non-intervention of legal bodies, which often result in heinous crimes, including death, towards the Dalits? Plays have often reflected on caste-based violence and exclusionary customs by adapting folk forms and performances…Read more