This exhibition was organised by Institute Français en Inde and The Gujral Foundation, with support from The Alkazi Foundation for the Arts as part of the Bonjour India Festival 2017-18 and the India Art Fair 2018.

Photography or image making today explores a matrix of conventions – artistic, social and political. It is also a media through which spectatorship takes precedence – a projection of the self as well as a moment wherein everyone views themselves as part of the citizenry of photography, a non-exclusive realm that must once again, stake its claim and engage comparative readings of places, people and events.

Images are burrowing into personal spaces and specified localities that challenge hierarchy, and as a result they provoke how the ‘universal’ creates a tension at the level of reception, asking where images belong once produced – geographically and in our intellectual history? Has the digital age for instance taken on an authoritarian character, and are there hidden forms of Eurocentrism that lurk in our midst which can be broken by the photographer as an assimilator of experience through the lens?

The 16 French and Indian artists selected in this exhibition contemplate their respective environments, and some specifically respond to the site of the exhibition, positing how we envision public and private zones as interlinked domains of encounter; and extendedly, how we take a mental image and translate or morph that into an installed piece – a conversation piece. It was meant to rouse viewers to think about the process of creation; how a conceptual space lends to the physical one and vice-versa. But conversely, does it mean that a body of work created in specific conditions or contexts, in a precise place, communicates in the same way to everyone? Can we arrive at a visual common denominator?

The French Social Anthropologist, Pierre Bourdieu spoke of a practitioners ‘form’ and ‘style’ (rather than subject alone) as devices with which he/she could connect with the medium as an arts practice: ways in which subjectivity and criticality could both exist in a single space. As a curatorial stand, this manifestation of Out of the Frame, titled Mutations was an attempt to configure images based on visual codes such as memory, narrative and symbolism, as a means to understand the integrated life of a photograph – looking beyond images into their situations (where and how they are placed) and the social contingencies that give them meaning. It was about a complex relationship with the viewer that incited this interaction – ethnology of readings wherein our participation, perceivably underwent constant revision – relating to the image and the observer. 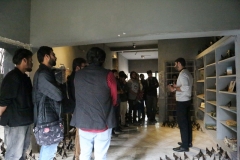