Simulation is no longer that of a territory, a referential being or a substance. It is the generation by models of a real without origin or reality: a hyperreal.
-Jean Baudrillard, Simulacra and Simulations (1981)

Terra Nullius (Latin: lit. ‘land belonging to no one’). This title interweaves strands of law, history and the natural world to question the human drive for conquest. Terra nullius is a legal term that refers to ‘territory without a master’, and is used in public international litigation to describe wild land, inhabited for centuries or millennia by self-regulating, socially organised indigenous groups/tribes, and not belonging to any political entity. Material and psychological re-readings of this term can be seen in this exhibition, as artists re-map and re-orient existing structures of control, keenly aware that we are all digital captives, negotiating the plethora of virtual choices, seduced into inhabiting and permanently occupying the firewalled, indispensable, addictive cyber-universe.

Displacing the logics of appropriation, presence, ownership and access onto what might be called terra digitalis, the artists seek alternative visual and analytical models to question shifting ontologies of the current human and environmental predicament. Donatien Aubert uses 3D animation to engage with the urban; Mustapha Azeroual investigates the elemental life of silver; Simon Brodbeck and Lucie de Barbuat generate a virtual being in photo-real form; Gregory Chatonsky invites artificial intelligence to comment on algorithmically generated image chimeras; Philippe Durand invents a 2.5D image of a hybrid landscape; Justine Emard builds a sensorium through neural signatures; Noémie Goudal projects/performs an illusory burning forest; and Hanako Murakami shapes a fluid landscape that can be invaded through the power of sight.

Emerging spectral edifices and networked ecologies in the ‘post-digital’ world continue to provoke shifts in the metaphysics of perception and readings of image cultures across the globe. In this moment, we are all complicit in the overwhelming generation of digital content driven by complex algorithms, relentlessly looped into our discovery of new formats and interfaces. This exhibition generated during the pandemic lockdown, presents compelling forms of machine logic, intelligence and reasoning.

De/re-construction, abstraction, interruption, inversion and subversion. These equivocal, polyphonic aesthetic strategies are intended to nudge the producer-spectator-consumer into uneasily traversing the binaries of the proximal and the distant, the filtered and the unfiltered, the apparent and the actual. Together, these eight practitioners invent compelling visual topologies that fracture, warp and redirect our perceptual coordinates, our habitual orientation and navigation of time, space, exterior and interior terrain.

Donatien Aubert
Cybernetics, the Living and the City, 2021 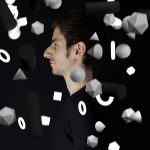 Donatien Aubert (b. 1990) completed his graduate studies at the École Nationale Supérieure d’Arts de Paris-Cergy, his post-master’s degree at the EnsadLab, and his doctorate in comparative literature at Sorbonne University. Through hybrid works including video, interactive installations and the virtual reality experience, he aims to problematise the philosophical legacy of cybernetic paradigms, their role in the development of digital cultures and their resilience in social and technological movements such as ecology and transhumanism. His work has been presented at the Super Modern Art Museum – SPAMM, Paris (2019); the Cité Internationale des Arts, Paris (2019); the Maison des Arts et de la Culture, Créteil (2016); Palais de Tokyo, Paris (2016); and the Centre Pompidou, Paris (2013, 2012). Click here for more information.

Gregory Chatonsky (b. 1971) has been reflecting on the nature of the Web since the 1990s, questioning the new subjectivities, identities and narratives that emerge from the digital network. In 1994 he founded Incident.net, one of the first Net art collectives in France. He is deeply interested in the issues of artificial intelligence, in the ability of machines to almost autonomously produce results that resemble human creation, and in the blurring of boundaries between the technological and the human. He has participated in numerous exhibitions in France and abroad, and has held residencies at the Cité Internationale des Arts, Paris (2020); at the Villa Kujoyama, Kyoto (2014); and at the Museum of Contemporary Art, Taipei (2012). Since 2017 he has been an artist-researcher at the École Normale Supérieure, Paris, leading a research seminar on artificial imagination and post-digital aesthetics. He is the artistic director of the Centre de Recherche Imago (ENS, ENSBA et UNIGE), Paris. Click here for more information.

Justine Emard (b. 1987) explores new relationships between digital technologies and their users. Since 2011 she has been collaborating with scientists and creating installations based on advanced systems such as augmented reality, deep learning and artificial intelligence. Her displays generate cartographies marked by uncertain exchanges between machines and humans. Her work has been part of numerous exhibitions in Europe, Canada, New Zealand, Russia, South America and Asia, including the Nagasaki Prefectural Art Museum (2020); the Fonds Régional d’Art Contemporain Franche-Comté, Besançon (2020); the Barbican Centre, London (2019); the National Museum of Singapore (2019); and the Moscow Museum of Modern Art (2018). In 2020 she was in residence at the Zentrum für Kunst und Medien, Karlsruhe. At present she is an invited artist-professor at Le Fresnoy, Studio National des Arts Contemporains, Tourcoing. Click here for more information.

Mustapha Azeroual (b. 1979) is a self-taught French-Moroccan photographer. Trained as a scientist, he bases his research on the observation of processes of image manifestation and experimenting with photographic supports. Questions about the materiality of the image are at the heart of his creative process. For several years he has been developing the Ellios project, a study of light, in partnership with the Observatoire Paris-Meudon LESIA (Laboratory of Space Studies and Astrophysics Instrumentation), while also dividing his time between France and Morocco in pursuit of his research interests. Since 2013 he has been represented by Galerie Binome, Paris, and his works are in included in the collections of the Musée d’Art Contemporain Africain Al Maaden, Marrakesh; the JPMorgan Chase Art Collection, New York; private holdings of Pieter & Marieke Sanders, Netherlands; the Musée Français de la Photographie, Bièvres; Am Art, Paris; and FRAC Auvergne. Click here for more information.

Noémie Goudal (b. 1984) graduated from the Royal College of Art and the Central Saint Martins school, University of the Arts, London. Her work examines the potential of the image as a whole, reconstructing image strata and possibilities for extension through films, photographs and installations. Oscillating between reality and illusion, her images present large-scale installations in natural spaces, and challenge our conventional notions of landscape and the human imprint upon it. Her work has been exhibited at the Kunstverein Hildesheim, Hildesheim (2019); the Ballarat International Foto Biennale, Ballarat (2019); the Musée des Beaux-Arts, Le Locle (2019); the Finnish Museum of Photography, Helsinki (2018); Le Bal, Paris (2016); the Photographers’ Gallery, London (2015); and the Fotografiemuseum, Amsterdam (2015). She won the Exposure Award, Photofair Shanghai in 2019, and the HSBC Prize for Photography and the Sea Award Knokke Heist in 2013. Her works are part of numerous collections, including the Centre Pompidou, Paris; the Kiran Nadar Museum of Art, New Delhi; and the Fotografiemuseum, Amsterdam. Click here for more information.

Philippe Durand (b. 1963) lives and works in Paris. His work examines the systems of representation of photography, and his composite images seek to amplify the real, shaping an authentic poetics of the ordinary. He teaches at the École Nationale Supérieure des Beaux-Arts in Lyon, and is represented by the Galerie Laurent Godin, Paris. He was the winner of the second edition of the photography contest themed on the Grotte Chauvet, a Palaeolithic cave in the Ardèche region of southern France that has exquisite examples of immaculately preserved prehistoric art (c. 33,000-c. 30,000), and produced a book on this subject in 2021. His work has been exhibited at the Fonds Régional d’Art Contemporain Normandie Caen, Caen (2020); the Centre de la Photographie Genève, Geneva (2019); the Centre Régional d’Art Contemporain Languedoc-Roussillon, Sète (2016); the Fonds Régional d’Art Contemporain Bretagne, Rennes (2015); the Musée d’Art Contemporain Grand-Hornu, Boussou (2012); La Virreina Centre de la Imatge, Barcelona (2012); Hyde Park Art Center, Chicago (2011); the architecture studio CA’ASI, Venice (2011); and the Centre Photographique d’lle-de-France, Pontault-Combault (2008). Click here for more information.

Simon Brodbeck (b. 1986) and Lucie de Barbuat (b. 1981) graduated from the National School of Photography, Arles and the National Institute of Oriental Languages and Civilizations, Paris. They have been working collaboratively since 2005, and their projects take the form of ensembles that thwart our way of perceiving reality through a shifted staging of everyday life. Their compositions capture in different ways the silent melancholy of humankind, translating the tenuous gap between its existence and the world of dreams. They won the HSBC Prize for Photography in 2010, and were in residency at the Villa Medici, Rome in 2016-2017. Their work has been exhibited at the Maison Européenne de la Photographie, Paris (2017); the Villa Medici, Rome (2017); the Institut Français du Japon, Tokyo (2014); and the FOMU – Fotomuseum Antwerp (2012). They have participated in group exhibitions at the Rencontres d’Arles; the Cairo Biennale; the Kunsthalle, Munich; and the Mucem, Marseille. Click here for more information.

Pascal Beausse is the Head of Photography collections at the Centre national des arts plastiques, Paris. Recent exhibitions he has curated include The Family of the Invisibles (Seoul Museum of Art, 2016), Y he aquí la luz (Museo de Arte Miguel Urrutia, Bogotá, 2017), Hiroshima Art Document (Hiroshima, 2019). In 2022, he curated Regards du Grand Paris, the national photography commission exhibition at the Magasins Généraux in Pantin, with Anna Labouze, Keimis Henni and Clément Postec. He and Quentin Bajac curated the Image 3.0 exhibition at Le Cellier in Reims. Pascal Beausse was a laureate of Villa Kujoyama, artists and researchers residency program in Kyoto, in 2007.

Rahaab Allana
Rahaab Allana is Curator/Publisher, Alkazi Foundation for the Arts, New Delhi); founding editor of PIX, a digital platform with a themed focus on South Asian lens-based practices and production; and founder of ASAP (Alternative South Asia Photography/ Art; the region’s first app for presentation and discussion of creative/cultural work by young practitioners. A Charles Wallace awardee and Fellow of the Royal Asiatic Society, he received his MA in Art History from the School of Oriental and African Studies, London and was Honorary Research Associate in the Department of Visual Anthropology at University College, London. He was Guest Editor for a Delhi-themed issue of Aperture (Summer 2021). He is the editorial board of Trans Asia Photography, and serves on the advisory committee/jury of various cultural forums.

Sukanya Baskar
Sukanya Baskar is an independent curator and researcher whose work focuses on both the still and the moving image. Her practice, involving graphic design, spatial design and curatorial research, has evolved alongside a deep interest in archival collections and structures. She has worked on a number of magazine and book design projects, including Witness: Kashmir 1986–2016/Nine Photographers, featured on the New York Times‘ list of Best Photo Books of 2017. Sukanya was a resident curator at the Fondazione Sandretto Re Rebaudengo, Turin in 2022 as a part of the Young Curators Residency Programme. She is a graduate of the National Institute of Design, Ahmedabad and the Center for Curatorial Studies, Bard College, New York.