As one of the most photographed destinations in essay checker and corrector the world, Calcutta has captured the imagination of European and Indian artists alike, who have been drawn to its unique melding of colonial structures and Bengali culture for several centuries.

Being the effective Imperial Capital of the British from 1773 to 1911, several architectural interventions were made in South and Central Calcutta in an effort to establish its political centrality. The area around Dalhousie Square (also known as Tank Square due to the presence of a water body) with structures such as the Victoria Memorial and Writers’ buildings, stands testimony to the stately poise of the Empire. At the same time in North Calcutta or Black Town, Bengali merchants and the newly formed local elite were building grand residential mansions, greatly influenced by European design, with motifs that were executed on a single symmetrical mass. The architecture of these homes, which appeared like palaces and country villas, carefully merged Indian and European aesthetics.

Given the swarm of visitors, there was an added proliferation of shops, industrial entities and public spaces. Large Corinthian pillars and stucco ornamentation on the ceilings, adorned these new structures. Bengali merchants imbibed these characteristics as a part of their new mansions in a side-show of power with the British, further incorporating vernacular tropes that lent a sense of ‘cultivated grandeur’. In the words of architect Kamalika Bose, these homes always had Indian souls, and their orientation followed a traditional Indian manner.

This exhibition looked particularly at the neighbourhoods along the Chitpur road in North Calcutta that were marked by a hybrid style. Sadly, in the present, crumbling and in decay, despite their unique historical relevance, they are not regarded as heritage buildings or sites of preservation by the government. In 2006, German photographer and Professor, Peter Bialobrzeski along with 21 students from the University of Arts, Bremen, took on the task of creating a visual record of type my paper Chitpur’s lived-in architecture. Calcutta-based architect and conservator, Manish Chakraborti was instrumental in this exercise, acquainting Peter with the area and informing him of its unique cultural relevance in the present.

This exhibition, which included manual colour pigment prints donated to the Alkazi Collection of Photography, looked at the collective authorship of 21 photographers, each possessing an individual vision in their own right yet coming together under the guidance of Peter Bialobrzeski to produce a set of images that had a unified language of expression. These contemporary works juxtaposed in places with those of earlier artists and photographers helped to draw parallels with how public spaces were viewed by travelling visitors or officers on duty, surveying and recording the architectural wealth of India. 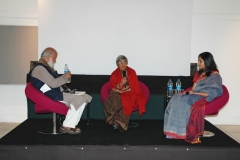 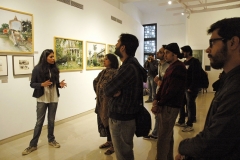