Candid: The Lens and Life of Homai Vyarawalla

India’s first female photojournalist, Homai Vyarawalla (1913-2012) was born to a Parsi family in Navsari, Gujarat and raised in cosmopolitan Bombay. She owed her initial interest in photography to Maneckshaw whom she met at 13, a distant relative who was later to become her husband. Her training in classical composition at the J.J. School of Arts also greatly assisted her photography. Homai believed 13 to be her lucky number and published most of her photographs under the pseudonym “Dalda 13”. Arriving in Delhi in 1942 as an official photographer for the British Information Services, Homai was to capture the visual backdrop of a nation in transition in the ensuing decades. The immense value of her work lies in the documentation of both the euphoria of Independence as well as disappointment with its undelivered promises.

From portraits of national leaders and nation-building activities, Homai recorded key events that were to have a decisive impact on Indian history. One of the two photographers present at the marathon meeting of the All India Congress Committee, Homai photographed discussions and votes where “a handful of people” voted for the 3rd June plan to partition India. Homai also captured the 1st flag hoisting ceremony, the departure of Lord Mountbatten from India, and the funerals of Mahatma Gandhi, Pandit Jawaharlal Nehru and Lal Bahadur Shastri.

The exhibition illustrated a reflection over the life of this master photographer – the only professional woman photojournalist in India during her time who not only survived but also excelled in a male-dominated field. Organized in thematic clusters, the exhibition displayed letters and other memorabilia that delineate alliances and friendships forged through photography, along with presenting images of the photographer herself to supplement an exploration through the life of a pioneering woman who chose an unconventional profession. 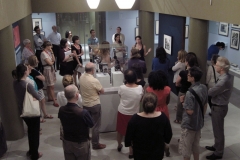