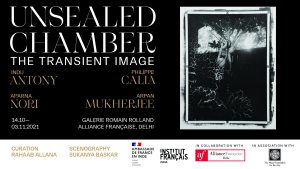 On the occasion of the 195th anniversary of the experimentation with photography as a novel form, to be patented in 1827 as a new invention in the world by the French practitioner Joseph Nicéphore Niépce, the exhibition Unsealed Chamber: The Transient Image presented the work of four contemporary artists working with analogue and digital methods, responding to vital transformations following a year of introspection during the course of pandemic.

Through newly made productions – Aparna Nori, Arpan Mukherjee, Indu Antony and Philippe Calia – explored a sense of creative hybridity by melding both manual techniques and new media to think about questions of self, society, ecology and representation. With a focus on ongoing social concerns, sometimes as subjects within their own images, they made crucial contributions to the ever-growing cultural history of the craft of image-making and identity construction.

The exhibition sought to exhume what we mean by an ‘original’ form in art, and its appropriation, manipulation and evolution in the present as a transient object. Each artist engaged with an intensive reworking of found or new material as a means to unpack his or her inner lives, using speculative means – montage and fiction. Working with multiple surfaces including glass, paper and cloth, they undertook an introspective journey to different paradigms of reality, provoked by a planetary consciousness of our common predicaments since the pandemic, and hence made us think about shifting, interpersonal exchanges.

Unsealed Chamber further considered our place in the world – our collective role as researchers, surveyors, archivists, and pedagogues with each individual contributing to an ever-enlarging knowledge system. Artist Philippe Calia, approached the planet via Google Earth satellite images, scrutinising sites which are mined for developing camera hardware on mobile devices. Through still and moving images, he explored the destruction of the surface of the earth, but also pondered the idea of reconstruction through core memories from his childhood seen in a video installation. The very texture of his images, drew us to the works of Aparna Nori, who performed acts of inscription – both as subject and spectator, creating salt paper prints of her own body and a recorded projection on draped muslin.

The very act of staging a life, creating connections between personal history, migration, dislocation as well as anchoring ones-self to a sense of impermanence, arised through the work of Arpan Mukherjee. His longer practice of print making in Shantiniketan, compeled him to use different vintage photographic processes in order to communicate a sense of change, but also leave behind an archival trace. The archive as an ever-growing entity includes what we know but also what we have not seen. Hence, the works of Indu Antony, part of the Bangalore-based artist collective, Kāṇike, then investigated and traced images of anonymous women found in heaps of discarded material. She reclaimed their place in world as active, engaged participants with agency, using a photographic technique that made the images to fade in time.

My work Nalla Pilla articulates the journey of becoming comfortable in my own skin. It began through exploring my relationship to my body, and listening closely to myself, questioning my anxieties, navigating my emotional states. Through the many phases of my life – as a child, a teenager, an adult, a mother – my body, existed within the entitlements and repressions of patriarchal culture, has experienced compulsion, dissonance, assault and ridicule. These bodyscapes, extreme close-ups of my skin, its flaws, folds and grooves, its varied responses to varied stimuli, build a visual document of the interior terrain I have walked all these years.

The creative process placed me in the roles of performer-spectator as I attempted to project the discomfort and trauma, the coercions of the external gaze and of the actions imposed upon me. For my final prints I used the salt-paper process, which I felt most naturally reflected, and thus extended, a highly textured personal narrative.

The final fifteen images are printed on 110 GSM Awagami Editioning fine-art paper. They are supported by a video installation: a performance piece in which I explore the words, phrases, experiences and emotions registered by the instrument of my skin, with textual content inscribed in my mother tongue Telugu and in English.

My family was part of the phenomenon of large-scale migration from village to city that has been ongoing in Bengal from the 1980s onward. Hence my work is broadly marked by themes of dislocation, displacement, exile and the making of a new home, presented through images that suggest a blend of personal space, collective memory and isolation. By frequently revisiting the same place across a span of time, I create a kind of layered memorialisation that I constantly engage with through the device of inserting images of my immediate family within the frame. Thus a new, and chronological, trajectory is embedded around the concept of belonging that in my mind remains timeless.

The very process of image-making allows for its imperfections to be visible, and compels us to acknowledge that repeated manual printing never yields the same result. The unique properties and actions of organic chemicals that layer the glass plate, that manifest in the albumen print, that belie the bichromate process, that appear mysteriously on the ambrotype – all these blemishes that occur with time on these surfaces mark the image as an entity of no fixed state. For these works I also incorporated organic visual elements appropriate to the conceptual armature, created either by defects that led to rejected plates, by technical error, and on occasion by intentional scratching of the glass plate negatives. 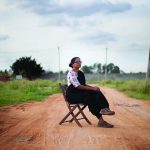 I started collecting photographs of women in 2008 – randomly encountered, discarded, anonymous images, abandoned and faded. I gradually shaped my collection at home, put the photos on my wall and prayed to them. I feel a sense of resonance with them, and these are the people I live with now.

I began making salt-paper portraits of these unknown faces. Salt prints have an ephemeral quality: over time they incrementally vanish in front of your eyes, just as all subjects inevitably recede, or are erased, in personal, familial and social memory. I altered the borders of the women’s portraits, edging them with my own hair. The strands serve as an organic frame that, as the print becomes less and less visible, will ultimately hold a void but itself will persist as the living residue of each work, as a form of presence purely dedicated to the inscription of absence, and as a witness to/testimonial of our existential fragility.

I first showed two of these prints in ‘Being in a State of Salax’ (2020), a Kāṇike Collective exhibition in Bangalore. 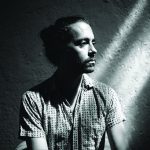 Philippe Calia
The Shape of Clouds | 2021

There existed a time when reality was monochrome, I used to think as a child. Black and white movies and old family albums had indeed moulded my understanding of the past in such a way. But at what moment did everything change to colour? It is also during childhood that, seeing plumes of smoke emerge from large thermal plants, I believed they would become clouds, bringing bad weather and constant rain.

Decades later, during the Covid-19 lockdown, while scoping the world through a satellite imagery platform, I located mining sites – deeply gouged and ruthlessly exploited sections of land that stood out from thousands of metres above sea level. These mines are the source of crucial metals needed for the hardware of digital image-making devices – and thus, for the production, storage and sharing of photographs today. Some sites are on land that for millennia has been sacred to indigenous communities.

Zooming in and out, using the very technology created via those very elements perhaps extracted from those very mines. I specifically focused on tailing ponds: depressions used for acidic waste water of ore-extraction processes. I reproduced and then reworked the smooth aerial images of these sites, washing and degrading them to produce new landscapes.

In contrast to the unbounded immensities of geological time, the video installation – composed from one family photograph taken on a beach by my father in the 1970s, and a few more recent images – takes me back to an era before I was born.