A PANORAMA OF PHOTOGRAPHY’S FRENCH CONNECTIONS IN INDIA 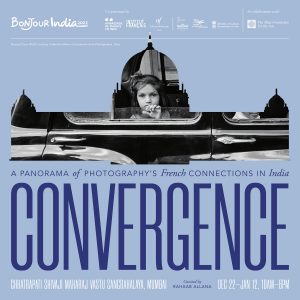 Organised in the framework of the fourth edition of Bonjour India, a pan India festival for the arts, the 75th anniversary of Independence and the 195th anniversary of the birth of photography – the exhibition Convergence: A Panorama of Photography’s French Connections in India presents works by prominent French practitioners, signposting some of the significant photo-documentary and other creative practices that developed in India over the last 150 years.

Produced by intrepid travellers, writers, journalists, photographers and artists, the exhibits span the colonial, modern and postcolonial periods of subcontinental history from the mid-nineteenth-century to the 1970s. The exhibition features works of notable French photographers over broad spans of time, such as Louis-Théophile Marie Rousselet, a French traveller in India during the 1860s who met India’s first photographer king, Sawai Ram Singh II in Jaipur, Marc Riboud a celebrated French photojournalist who worked for Paris-based Magnum Photos from 1953-78 and travelled all around Asia in the 50s along with the works of many other modern European masters such as Denis Brihat, Paul Almasy, Edward Miller and Bernard Pierre Wolff among others.

Ahmedabad
The first manifestation of the outdoor exhibition was showcased at the iconic, Amdavad ni Gufa, a location that brought together both, the experimental architecture of the extraordinary B.V. Doshi and murals by the master artist, M.F. Husain.

Chennai
The exhibition eventually travelled further south and was displayed in the complex of the Government Museum, Egmore, an iconic Indo-Gothic structure, declared the second oldest museum in India that was built in 1851, showcasing a variety of numismatic and archaeological collections.

The exhibition was on view at the Indian Museum, Kolkata, the oldest museum in India, established in 1814.

Musée Goupil, Bordeaux
Created in 1991 by the Town of Bordeaux, the Goupil Museum is dedicated to the image, its techniques and its uses in the 19th century. It contains the collections of the House of Goupil, a dynasty of art publishers and international gallery owners based in Paris who were active from 1827 to 1920. The Goupil collections consist of 70,000 photographs, 46,000 stamps, 7,200 matrices (engraved coppers, stone lithographs, typogravure and chromotypogravure blocks, glass negatives) and one thousand books and illustrated reviews.

Musée National des Arts Asiatiques – Guimet
Presenting 5,000 years of Asian art, the Musée Guimet is the largest European museum devoted to Asian art. Its collections are of unparalleled richness and diversity outside of Asia. From the Buddhas of Afghanistan to the Zen monks of Japan, from Indian fabrics to Samurai armour, and from Khmer treasures to Chinese fine art, the Musée Guimet presents all the civilizations of the Asian continent.

Musée Nicéphone Niépce, Ville de Chalon-sur-Saône
Located in Chalon-sur-Saône, the aim of the Musée Nicéphore Niépce is to explain the basics of photography from its invention by Niépce up to today’s digital imagery. Its collections bring together almost three million photographs and objects that provide the possibility of a constantly renewed experience visit after visit. The use of interactive terminals and increasingly sophisticated technology provides a deeper understanding of the photographic world. The museum is planned as an initiation to the broad principles of photography. Professional prints are displayed side by side with amateur efforts. The illustrated press has an important place as an essential support to the worldwide spread of the medium.

Maison Européenne de la Photographie, Paris
Since opening in 1996, the MEP remains the primary French institution dedicated to photography in all its forms. Their exhibition programme includes both internationally recognised and emerging photographers and filmmakers, highlighting the diversity of artistic approaches to contemporary lens-based practices. Including a world-class collection of photographic prints and artists films from the post-war period and one of the largest specialised research libraries in Europe, the MEP is without equal in Paris.

The Alkazi Collection of Photography
The Alkazi Collection of Photography (ACP) is an archive consisting of an array of photographic material primarily shot between 1850 and 1950. The core of the collection comprises works in the form of photographic albums, single prints, paper negatives and glass-plate negatives, painted photographs and photo-postcards from South and Southeast Asia. These vintage prints illustrate the progression of socio-political life in the Indian subcontinent through the interdisciplinary fields of archaeology, architectural history, anthropology, landscape art, topography and military studies.