This volume presents for the first time the work and career of photographic pioneer James Waterhouse (1842–1922). 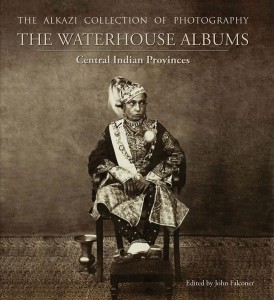 From his early career in Central India in the 1860s, through to his technical achievements in Britain in the 1900s, this comprehensive account traces the career of an enigmatic figure devoted to the medium, acknowledged by his peers as “the father of photo-mechanical work”, yet who today remains unjustly neglected within the world of photography.

Waterhouse’s first major photographic work was undertaken from 1861-62, shortly after his arrival in India as a very young Second Lieutenant in the Royal Artillery. During this period, he was deputed on special assignment to photograph rulers, tribes, communities and archaeological subjects in the Central Provinces. The results of this survey are perhaps the first photographs of the Buddhist site of Sanchi, and a series of remarkable portraits from the court of the Begum of Bhopal, as well as of significant noblemen and groups from the surrounding area. The portraits are accompanied by Waterhouse’s extensive notes, reproduced in the book with images for the first time.

John Falconer is Jerwood Curator of Photography at the British Library.

Michael Gray is an independent scholar and photographic historian, and former curator of the Fox Talbot Museum.

Rosemary Crill is Senior Curator of South Asian Art at the Victoria and Albert Museum.

Michael Gray is an independent scholar and photographic historian, and former Curator of the Fox Talbot Museum.

Shaharyar M. Khan is a historian and direct descendant of the Bhopal ruling family.