Between Princely India & the British Raj: The Photography of Raja Deen Dayal

Raja Deen Dayal (1844-1905), a prolific and path-breaking lensman from the Indian subcontinent, occupied a unique 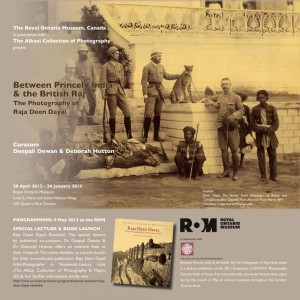 position between multiple worlds, crossing class, cultural and racial lines. Derived from this complexity, Dayal’s work illustrates the heterogeneous nature of photographic history in India, and by extension, Indian modernity.
Beginning photography in 1874, Dayal embarked on a remarkable career, establishing three highly reputed studios in Indore, Secunderabad, and Bombay and employing over fifty staff photographers and assistants. More than 30,000 images of architecture, landscape and people were produced by them, which vitally participate in the visualization of India’s past.

In conjunction with the colossal numbers, Dayal’s work also encompasses an impressive breadth of subject matter. The exhibition, presented by The Royal Ontario Museum (ROM) in association with the Alkazi Collection of Photography, showcased iconic architectural views, striking landscapes, military manoeuvres and festival processions. These images portrayed the visual strategies adopted by the photographer, highlighting the strength of his strong sense of composition and tonal gradation.

Curated by Dr. Deepali Dewan (Senior Curator, ROM) and Dr. Deborah Hutton (Art Historian, The College of New Jersey), the exhibition was accompanied by a special lecture, Raja Deen Dayal: Revealed, on May 9 by the co-curators which was doubled as a book-launch for their publication Raja Deen Dayal: Artist-Photographer in Nineteenth-Century India.

The exhibition consisted of four thematic sections. The Business of Photography demonstrated the inner-workings of the firm of Raja Deen Dayal & Sons, including the types of commissions they received and the amounts they charged. Civil Works and Princely States examined the production of Dayal’s earliest photographs in the context of colonial public works. Royal Photographer: Hyderabad explored Dayal’s role as court photographer to Mahbub Ali Khan, the sixth Nizam of Hyderabad. The Art of Portraiture delineated the flourishing success of Dayal’s various studios and their role in creating a modern age with new ways of perceiving the self.

The exhibition thus seeked to illustrate Dayal’s photographs as produced within and circulating across the overlapping arenas of the colonial administration, princely India, and the emergent cosmopolitan metropolis along with being active participants in these discursive spaces.