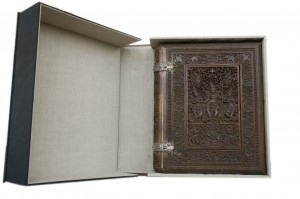 and early twentieth-century photographs from India, Burma, Sri Lanka, Nepal, Tibet, Afghanistan, China and Japan. The core of the Collection comprises works in the form of photographic albums, single prints, paper negatives and glass-plate negatives, painted photographs and photo-postcards. The Collection is particularly strong in areas such as archaeology, architectural history, the urban development of colonial cities, military studies, Princely India, anthropological studies of the people of South Asia, as well as landscape and topographical views. Some of the prominent photographers featured in the collection include Dr. John Murray, Felice Beato, Linnaeus Tripe, Alexander Greenlaw, Samuel Bourne, John Edward Saché and Raja Deen Dayal among others.

Some of the highlights of the Collection include:

■ The Tressider Album – Images by John Nicholas Tressider, the Civil Surgeon at Kanpur of the major events / places of the Uprising of 1857 at Kanpur & Lucknow

■ Samuel Bourne and the Bourne & Shepherd Studio in India, the 1860s