The Alkazi Foundation for the Arts in collaboration with the Goethe Institut/Max Mueller Bhavan organized a workshop for enthusiasts selected by the MMB, which focused on Indian architecture and its visual representation through a study of works housed in the Alkazi Collection of Photography. There were a total of twenty participants who came for the workshop. This visit was in conjunction with the photographer, Robert Schaefer’s exhibition Architectural Blue, held at G-I/MMB. Mr. Schaefer was also present at the workshop.

Staff at the AFA addressed different aspects of representative forms of visualising Indian architecture, from the late 18th to the early decades of the 20th century. This included a brief glimpse of pre-photographic forms of documentation along with a varied analysis of photography and the frames through which Indian architecture came to be viewed and studied in Colonial India. 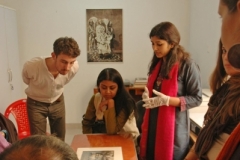 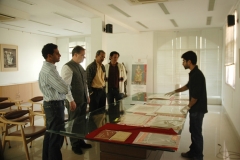