Lucknow: Splendour and Decline [OUT OF PRINT]

Lucknow and Avadh were names that conjured 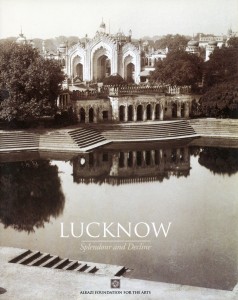 up, in the European imagination of the 18th and early 19th centuries, fantasies of oriental splendour and opulence. Few courts had attracted such vast numbers of merchants, travellers, artists, scholars and military adventurers from distant regions who sought patronage and fame, and yearned to luxuriate in the exotic life-style of the East.

This exhibition catalogue focuses on Lucknow – the embodiment of Avadhi culture, as reflected in the city’s architecture and urban design, viewed through the eyes of 19th century photographers. Most of these had come in the wake of the horrific carnage and destruction that took place during the Revolt of 1857, in the course of which large sectors of a once radiant and sparkling city were reduced to rubble. Despite that, what becomes apparent – even through the lens of a frequently hostile camera – startles the viewer.

The catalogue seeks to delineate the physical splendour of the city during this period, reflected in its buildings, many of which no longer exist. It was in Lucknow that the nawabs constructed an impressive array of religious buildings. Since the majority of their subjects were Hindu, and they themselves from the minority Shia sect of Islam, the nawabs quickly made Avadh the centre of the Shia faith in northern India.