TO SEE A WOMAN in a sari navigate the city streets with a camera was certainly unusual. But not for Homai Vyarawalla who photographed the two cities she knew and loved: Bombay and Delhi.

Bombay was the city of her childhood and first romance. In the forties, the Parsis had a strong and visible presence. Not surprisingly, her images of every-day life in Bombay were set in spaces familiar to this young middle class Parsi girl. These included the fire temple in Tardeo and Chowpati beach where the newly married Homai and Maneckshaw had hosted themselves a private ‘reception’ by sitting on the rocks and eating Bhelpuri. Homai Vyarawalla’s first subjects in Bombay were her friends from the JJ School of Art. She photographed these young women learning career skills but also at picnics where they posed for the camera like film stars. She shot many photo stories that outlined the corrective and transformative nature of institutions. Later Vyarawalla photographed public processions and civic
preparations for World War II in the city.

On a cold winter evening in 1942, Homai Vyarawalla arrived by the Frontier Mail and fell in love a second time. It was with Delhi, a city that would be her home for 27 years. The city and its history had fascinated her since childhood. Connaught Place, where she lived was her favorite and she called it a “pearl necklace.” Homai and Maneckshaw spent time photographing Delhi’s monuments. As an employee of the British Diplomatic Mission, she chronicled the post-Independence cityscape as streets got renamed and colonial statues were removed.

In a sparsely populated Delhi, Homai Vyarawalla never lost an opportunity to photograph large crowds. She photographed the first Republic Day parade against the backdrop of the Purana Qila before it moved to its now familiar setting on Rajpath. Traveling unescorted through the streets of old Delhi, she photographed the Ramlila procession passing through Khari Baoli and the Jama Masjid during Eid. Her sari worn Parsi-style attracted much attention. Once in Chandni Chowk she was asked: “Parsi kya cheez hai?” (What is a Parsi?) 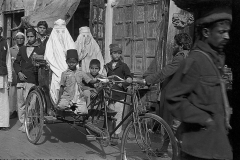 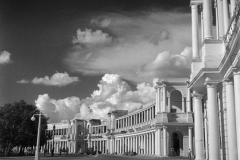 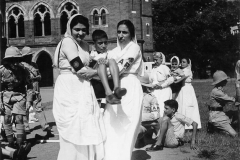 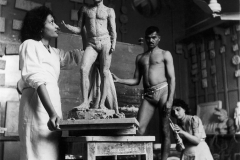 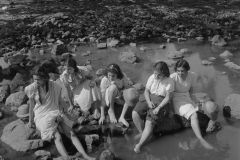