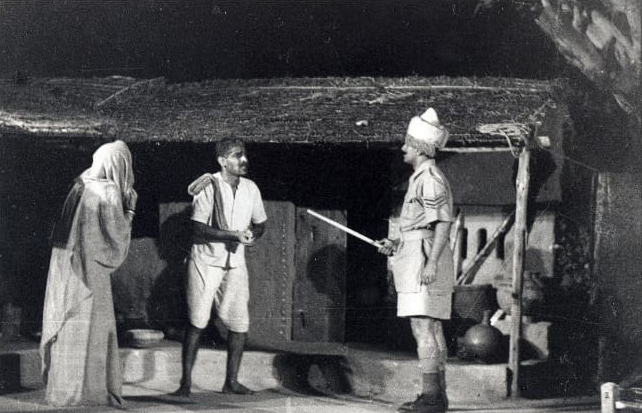 To celebrate the birth anniversary of Munshi Premchand, today the Alkazi Theatre Archives will be looking into the last completed novel by the author, Godaan (The Gift of a Cow) written in 1936. Set in colonial times, Godaan paints a realistic picture of the hardships of a poor peasant couple (Hori and his wife Dhaniya) in northern rural India, who experience the vicious nexus of caste segregation, aggression of semi-feudal economy and rigidities of traditional power structures.

In 1967, Premchand’s novel was adapted as a stage play, ‘Hori’, by theatre director Ebrahim Alkazi and was performed by his students from the National School of Drama in Meghdoot Theatre, Delhi.

‘In presenting a play such as Hori the students erect a village. They shape an environment and see how environment shapes homes, shapes minds…Is this a mere stage set, scenically arranged, to create superficially a realistic effect? Surely more than that: these homes, fields, trees, lanes, well, shop, together inscribe the shape of human relations: establish the contours of village society. How social institutions are formed, how they serve or suppress the individual; the zamindari, caste, panchayat, joint-family, money lending and dowry systems; the treatment of widows; the problems of illiteracy and urbanisation; the conflict between the generations; agricultural methods, animal husbandry-all these need to be studied even more than the … paraphernalia associated with the stage’